Quitting smoking can be a daunting endeavor – anyone who’s ever tried it can attest to that. This is because nicotine – the key ingredient in tobacco that leads to addiction – rewires the brain to such an extent that the most severe withdrawal symptoms can resemble those that heavy drug addicts go through when they are weaning themselves from what society perceives to be much worse drugs.

However, most researchers and physicians agree that nicotine is just as addictive as heroin or cocaine and people get’ hooked’ on nicotine in a similar way they get hooked on other drugs.

Effects of nicotine on human body:

It’s important to know what to expect once you decide to smoke your last cigarette. Not being prepared can seriously diminish your chances of succeeding.

Nicotine withdrawal symptoms vary and will depend on how long and how much you’ve smoked.

Most of these symptoms will peak during the second or the third day into the cessation process. Not everyone who stops smoking will experience all of them – in fact, most people will have the toughest time fighting cravings, irritability, and difficulties concentrating so they might not even notice the rest.

The first 72 hours are the worst for most smokers so let’s focus on them.

More than 70% of smokers who decide to quit will experience nicotine cravings and increased appetite. These symptoms of nicotine withdrawal are the most persistent ones and can last for more than 4 weeks.

Around 60% of people will suffer from anxiety, depression, poor concentration, or irritability – these mental symptoms can last up to 4 weeks but will gradually subside. If they persist, we advise you to talk to your doctor about them.

The scenario described above applies to smokers who decide to quit without assistance. Assistance, in this case, means nicotine replacement therapy. Of course, not everyone has the stamina or willpower to go through this and that’s perfectly alright. Smokers determined to quit the habit have a lot of nicotine replacement options at their disposal. If you decide to use them make sure you talk it out with your doctor and follow the instructions.

Symptoms of nicotine withdrawal will not be so prominent if your body is getting nicotine from sources other than a cigarette. NTR should be used as needed as there is a danger of substituting one addiction with another. After 8 to 12 weeks you should start lowering the dose of nicotine you are administering to yourself until you’re completely nicotine-free. 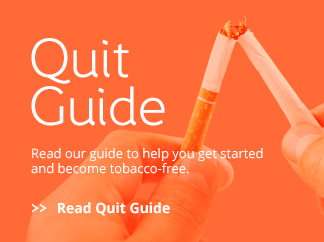