Smoking is by far the most common way people indulge in tobacco and feed their nicotine addiction. There are other delivery methods, such as chewing tobacco and replacement e-cigarettes but it’s estimated that close to 1 billion people still smoke worldwide. 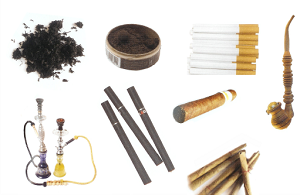 The number is hard to assess correctly because we’ve been seeing a slight decline of tobacco use in the western countries (so called 1st world countries) but no reliable data can be obtained for the rest of the world – namely, 3rd world and developing countries. Still, research that was conducted in the past shows that close to 80% of smokers live in those parts of the world and that they are predominantly in lower and middle-income countries.

Smoking tobacco products carry with them an increased health risk. In addition to highly addictive nicotine, smokers can also inhale anywhere from 4,800 to 7,000 other chemicals – depending on what is inside their cigarette! These chemicals are a byproduct of over 600 different ingredients found in every cigarette and most other tobacco products.

…and more than 600 hundred others. All of these mentioned ingredients have been found to cause cancer along with more than 55 other ingredients commonly found in cigarettes.

Cigarette smoking has been found to increase likelihood of cancer affecting all systems and organs in human body:

Nicotine is a dangerously addictive drug but when absorbed through a cigarette or any other smoking equivalent the effects can be devastating because it’s not the only substance that is absorbed. In fact, while some studies show that, while nicotine might cause cancer, it is possibly one the least cancerogenic ingredients that are added in cigarettes.

There is a good variety of tobacco products and while cigarettes are the most popular they are by no means the only possible method of inhaling tobacco smoke. Some of these methods and products hail from the past when cigarettes were not readily available but they’ve managed to survive to this day and still have a large user base.

About 5.8 Trillion cigarettes were smoked worldwide in 2014, a staggering number only overshadowed by the fact that 2015 was even worse – we still don’t have an exact number but if trends are to be believed cigarette consumption is on a global rise.

There are currently around 40 million cigarette smokers in the United States of America. That’s close to 17% of total population. One-third of them are living with a smoking-related illness.

A cigarette is a roll of tobacco. The name is reserved for nearly all products that are rolled in thin paper or anything else that does not contain tobacco. It’s the most widespread means of nicotine delivery – cigarettes are dominant in most developed countries and only give way to cigars and other tobacco smoking products in Cuba and India where cigars and hookahs are a preferred method of smoking.

Whenever your light a cigarette you create a chemical reaction called combustion. Combustion is not a nice-sounding word – it’s something you expect to find in engines and not near your mouth and lungs. The combustion process rearranges chemicals inside the cigarette, creating toxic gasses that are harmful to your health all on their own – even without considering all the poison you’re breathing in.

For some reason, most people think that smoking cigarettes branded as ‘light’, ‘mild’, or ‘ultra’ reduces risks to one’s health. There is absolutely no evidence backing this up.

Same goes for menthol cigarettes. They contain substances usually found in peppermint and spearmint plants and cause a cooling sensation while smoking. Since that cooling sensation facilitates smoking by making it less unpleasant, people tend to believe that they are avoiding the worst from cigarettes. Actually, they are equally exposed to harmful substances as people smoking regular cigarettes – they’re just noticing it less which can be more harmful in and of itself.

In fact, the only reason menthol cigarettes exist is to lure younger people to smoking more easily. Flavors and the cooling sensation appeal to the younger population which is why it’s illegal in the US to manufacture and sell menthol and flavored cigarettes. Also, manufacturers can no longer brand cigarettes as light or mild as it’s prohibited by law and deemed to be misleading.

Cigar and pipe smokers also often claim that they are avoiding the worst health dangers of enjoying tobacco by actively avoiding cigarettes, which they perceive to be the worst type of nicotine delivery system. The common excuse is that they smoke one or two cigars a day and that that is nothing compared to 20 – 30 an average cigarette smoker smokes.

Actually, a cigar contains half an ounce of tobacco which is roughly as much as a pack of cigarettes. Also, a cigar will have anywhere between 100 and 200 mg of nicotine while an average cigarette contains 12 mg. As you can see, smoking two cigars is as bad as smoking a pack of cigarettes, if not worse.

Also, every tobacco that is manufactured for smoking – including the one that goes into pipes – is treated with pesticides and other chemicals so a lot of those that are present in cigarettes are present in pipe tobacco.

Hookahs pose the same danger to your health as cigarettes. An average hookahs session lasts 1 hour. During that time, a smoker inhales 90,000 ml of smoke as opposed to 500-600 ml a smoker smoking a cigarette inhales.

Tobacco in hookahs is heated by charcoal. Studies suggest that this method of delivery puts smokers at risk of inhaling much larger quantities of harmful carbon monoxide and heavy metals as well as nicotine.

Bidis hail from India. They are hand-rolled and the tobacco is covered in a tendu or a temburni leaf that is native to Asia. They can be flavored or unflavored.

Clove cigarettes (also referred to as Kreteks) are from Indonesia. They usually contain 60% tobacco and 40% cloves. They are banned in the United States because of the blanket ban on flavored cigarettes.

All smoking tobacco products bring with them health risks and none is ‘safer’ than the other. All contain harmful substances that create toxic chemicals when they burn and most also contain a highly addictive drug, nicotine.

The best way to reduce and completely eliminate the risk to your health is by quitting smoking altogether and not substituting one bad habit with another. Tobacco is the leading cause of preventable death around the world and it’s never just about the smokers, either. Secondhand smoke is also a serious cause of illness and death. Think about yourself and those around you before lighting your next cigarette or cigar – and save lives by quitting smoking.